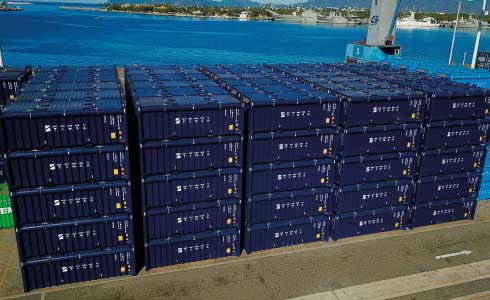 Hutchison Ports TIMSA in Manzanillo made an investment of 2.5 million dollars for the purchase of 200 flip-up containers (rotainers) and 2 revolver-type spreaders, which are designed to transport and handle bulk mineral.

With this acquisition, Hutchison Ports TIMSA will have a total team of 340 special containers and 4 revolvers, with the aim of increasing the productivity of its operations, for the benefit of its customers, port users.

This technology is a viable alternative to the traditional systems of bands, since it increases the productivity of the operations in the handling of mineral bulk cargo with this type of equipment, reduces ships waiting time by optimizing the resources of all the parties involved, thus being able to simultaneously operate up to 3 mineral bulk vessels.

Special containers have the capacity to transport up to 36 tons and handle products with a density range of up to 9.1 Tons / M3, which translates into the possibility of operating all types of copper, zinc, lead and iron concentrates as well as mineral of iron in pellet and in forest, among many others. They have an airtight lid that allows the safe transport of mineral bulk. In the same way, the spreader system has a special attachment to rotate the container 360 degrees.

The aforementioned system is friendly to the environment, since it eliminates dust emissions on the docks during operations and avoids contamination during transportation from the warehouse site to the port.

Hutchison Ports TIMSA reaffirms its commitment to the Port of Manzanillo, by making new investments to acquire high technology equipment that allows the environment to be taken care of during the execution of its operations.